After the onset of focal dystonia, movements that once had been automatic became so difficult to do. Placement of the hand on the keyboard felt very confusing. And when I tried to redefine movement by sensation and vision, I didn't really know how to do it because the I didn't have an image that I wanted to reproduce.

How could I not find it? Could it be that I ignored all those sensations that it never became part of my strong memory?

If a perception of our own body is greatly influenced by experience and how we filter information and process the world around us, I wonder how a body image of a pianist with focal dystonia would look like.

Perhaps enlarged fingers and hands? Or maybe blurry fingers? Hands, arms and body that is vaguely dis-attached from each other?

I suspect some inaccuracy of perception.

If clear imagery is formed by defining the border of an object, sensory feedback from the skin, which is the border between the body and the outside world, helps us understand where the body 'ends' and forms the outline of our body image. Just by experiencing a touch on the surface of the skin of the fingers, we experience that the fingers are there.

But when we are at an unstable state where we don't have a clear understanding of where exactly the border is between the body and the outside world, our mind craves to know where it is, which I think is the by-product of the symptom of MFD, the craving for the sensory feedback.

On the flip side, habitually being unattentive to a function of a body part could lead to lack of sensory feedback which distorts the body image, which could be one of the reasons for the build up to the onset of FD. This imbalance might have been caused by repeatedly over stimulating or giving too much attention to one part of the body and ignoring another. We can easily ignore one part of the body by habitually being un-attentive. Often times the lack of understanding of the connections between the body and the arms, and of the arms and the hands is directly translated into tension in attempt to 'sense' that connection.

The state of focal dystonia is like a craving for sensory feedback. From my understanding, when we start feeding our body with sensory input that it craves for, the symptoms starts subsiding. It's almost like when the body gets its sensory craving taken care of, it balances the excessive motor signal back to minim to carry out an operation efficiently again. Reconstructing a more accurate body image is probably one of a good ways to visualise when retraining.

# 1 With your dystonic hand, play one note but have all of the other 4 fingers raised in the air.

Assuming that you are allowing the rest of the body at ease, you should be more or less feeling better doing #2, because your fingertips are receiving a sensory feedback from the surface of the keys.

Perhaps when we decide to feed our body with the correct sensory feedback, the body finds comfort in knowing that the hands and fingers are actually there and ends there.

Some people have less symptoms when wearing gloves, putting rubber bands, which is called the sensory trick. It is not so much of a 'trick' if gloves and rubber bands are just helping you have more input that your body wants.

I would, as much as I can, have the inactive fingers on the surface of the keyboard especially when you are training. It might feel awkward at first depending on the point of contact of your fingertips on the keyboard and your position in general, but try aiming for your the best shot at the most natural position you can possibly find. 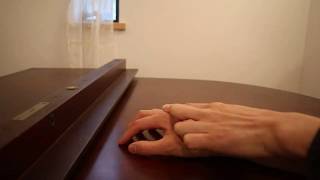